Congratulations To Donna Moeller For 40 Years of Volunteer Service 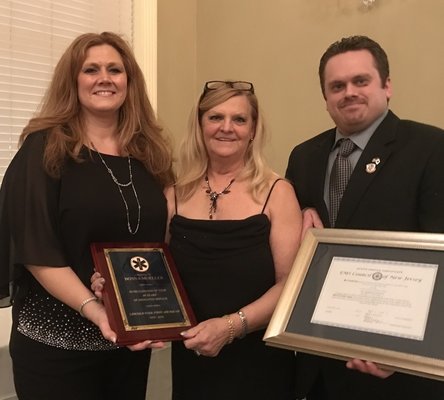 Lincoln Park EMS (LPEMS) President Ruth Poskitt, left, and Chief Jay Meisch congratulate EMT Donna Moeller on 40 years of volunteer service, during the squad’s 2017 installation dinner in Oakland Jan. 14. Moeller, who has held every one of the 51-year-old squad’s offices during her tenure and remains an active riding member, is the first LPEMS member to receive the award.  Moeller, who also received accommendation from the EMS Council of New Jersey, estimates she has answered several thousand calls during the last four decades. “My most memorable call would probably be responding to Liberty State Park on 9/11 and seeing the response and dedication of the numerous agencies who responded from New Jersey to back up New York’s EMS agencies,” Moeller said.  “I’m so proud of New Jersey’s volunteer EMS.”
This website was developed and is managed by:
201-468-9600
support@entrixsystems.com
Copyright © 2022 Entrix Systems Inc.
All rights reserved